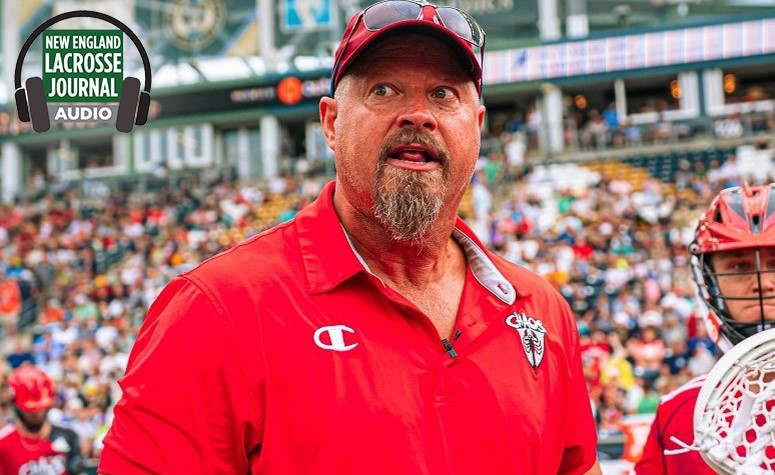 New Canaan, Conn., native Andy Towers is one of the most electrifying coaches in the game of lacrosse. His energy level and competitiveness are without peer in the sport.

For the second year in a row, his Chaos LC team has advanced to the Premier Lacrosse League championship, where it will once again face two-time defending champion Whipsnakes LC on Sunday in Washington, D.C.

Kyle Devitte and Jack Piatelli spoke to the Connecticut Hall of Famer about his career as a player and a coach at both the college and professional level on this week’s “Chasing the Goal” podcast.

This podcast is sponsored by Streaker Sports and University of Nebraska High School. Streaker Sports has a unique selection of vintage collegiate lacrosse tees and shorts with new styles being added every month. For a limited time, and only for “Chasing the Goal” listeners, use the code “CTG20” at checkout to get 20 percent sitewide at StreakerSports.com.

Jack Piatelli: What’s been the difference between coaching at the college level versus the professional level for you?

Andy Towers: There’s a lot of differences. It’s a totally unique challenge. In the college game the players, even though they’re very good players, they’re still developing as it relates to their skill-set. Stick-work, handling, groundball play, shooting — they’re still a work in progress as it relates to developing their IQ. Knowing what is the right play based on their respective role in each situation. You’re with each other so much more than you are when you’re coaching professionals.

The one thing that’s really enjoyable about coaching professionally is that you don’t have to coach skill-set development. These guys are playing professional lacrosse for a reason — their skill-sets are incredible.

JP: You’re one of the most competitive players that I’ve ever played with or against. When you look at the draft, are you looking for players with the same characteristics that you had in terms of their competitiveness?

AT: I don’t think anyone gets to the professional level unless they’re hyper-competitive and want to be the best. I don’t think guys that are casually interested in becoming good players ultimately get to the point where they can make a gameday roster in professional lacrosse or professional sports in general.

Kyle Devitte: Can you share part of your workout routine with us?

AT: I do the same workout Mondays and Thursdays, which is I run an incredibly slow two miles. And then I do legs. With all of my lifting, I do high reps (and) low weight. About five years ago, I was still lifting heavy. Relative to me, at least. I was doing it slowly, I’m 52 now, and at 47 I started to notice that my shoulder joints hurt, my elbow joints hurt and I thought to myself, “Why am I trying to lift all this heavy weight?” The goal is to not be fat and bald. My wife, the best she can get is one and one. She doesn’t need to be oh and two. So if my joints are aching, I’m not going to be able to work out, and my goal is to feel good and be healthy. From the podcast: Kyle Harrison on his career and legacy

On the latest episode of “New England Lacrosse Journal’s Chasing The Goal” podcast with Jack Piatelli and myself, Kyle Harrison joined us to talk about a…
Read More Commentary: Why Paul Rabil’s influence may never be matched